Catherine (Curry) Mardon, 2007 Newman graduate, advocates for those with mental illnesses and disability, and young adults suffering from fetal alcohol syndrome. Mardon said her time at Newman was positive and “the professors were top notch, and really instilled in me a hunger for social justice.”

After receiving her Bachelor of Arts in Pastoral Ministry, Mardon and her husband, Austin, began a ministry helping individuals who were mentally ill start the disability process so they could receive the medication they needed. They also volunteered with large homeless shelters in Oklahoma City.

“My experiences with them made me open to having a relationship with my husband,” Mardon said. “He has schizophrenia and is an advocate for the seriously mentally ill. When we married, his ministry became mine.

“For the last 12 years, I’ve hosted holiday parties for the mentally ill or mentally disabled. It can be very hard for them around the holidays.”

The couple fed more than 100 people between Thanksgiving and Christmas last year.

“We give speeches on working with the mentally ill every week to social workers, psychiatric nurses, med students, psych students and the like,” explained Mardon. “We just gave a speech this week at a conference on people with developmental disabilities, and to grand rounds for the psychiatric department at the University of Alberta on relationships and mental illnesses.”

Outside of helping those within the community, the two have spent the past six years taking in young adults with developmental disabilities and fetal alcohol syndrome who aren’t ready to be independent but have aged out of foster care. They adopted two, who are now 23 and 26.

“Some of the kids have had horrible lives and we do the best we can to show them love. Some are so damaged that there’s not much we can do,” Mardon said. “That can be very sad. It helps that I’m a baseball fan. You can fail 75 percent of the time and still be an all-star in baseball. That’s about our batting average with these kids. I just hope that the ones that slip through our fingers sometime in the future will remember that someone loved them.” 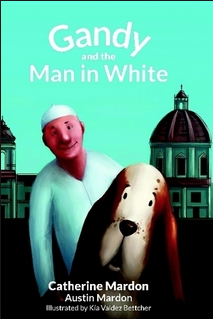 When Mardon isn’t volunteering her time she is using her talents to write books.

“I’ve written around a dozen children’s books,” she said. “They feature our very spoiled basset hound. Each explains a difficult subject in a way that kids can understand, such as addiction or disability. ‘Gandy and the Man in White’ has been our most popular. It deals with homelessness and takes place in Rome. Gandy gets arrested by the Swiss Guard when he runs off with the Pope’s rosary. It’s been translated into 10 languages. Our former auxiliary bishop sent a copy to Rome and we received a nice thank you note from the Pope for the gift and the devotion that inspired it.

“I’ve written several adult books as well,” continued Mardon. “Most deal with mental illnesses and disabilities. One is on financial planning for the disabled. One is a collection of stories about my most interesting clients. One is on dealing with kids and young adults with fetal alcohol disorder.”

Mardon explained, “My husband and I were nominated for the papal knighthood by a former pastor. He was the priest that married us. From there it went to our archbishop, then to the papal nuncio, then to Rome. The final arbiter is the Pope himself. We were nominated for just the basic knighthood, but the Pope increased it to the Knight (and Dame) Commander, a higher level.

“As you can see, those are my passions — the church and kids. It’s ironic that someone who never had kids of her own has collected several dozen along the way,” Mardon concluded.