Alumnus Curtis Nightingale is in his second year as principal at Bennington Junior/Senior High School in Bennington, Kansas, about 15 minutes north of Salina, and his school has been chosen by the Kansas State Department of Education (KSDE) to be a part of its new project “Redesign.”

The new project takes one elementary and one secondary school from each district to be redesigned around the five outcomes established by the Kansas State Board of Education, the five elements identified as defining a successful Kansas high school graduate, and what Kansans said they want their schools to look like in the future. 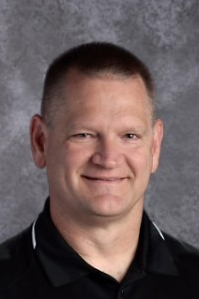 Before becoming principal of Bennington High School, Nightingale worked as a police officer. Before retiring from the force, he began studying at Newman University and received his undergraduate degree in secondary education in 2001.

“The benefit of going through Newman University, it’s a classroom of 12 versus 45 or 145. You have an opportunity to make a better connection,” Nightingale said.

As a student and undercover narcotics officer at the same time, Nightingale was constantly busy but he wanted the education, so he went through Newman’s accelerated program.

“If it hadn’t have been for the accelerated program, I wouldn’t be sitting where I am now,” said Nightingale. “(The) format was a couple nights a week and some Saturdays. That was something I could get into my schedule. It was economical in terms of the time commitment away from home.”

Nightingale was drawn to education when he began coaching his son’s football team.

“I started coaching little league, followed through the ranks, caught some attention at colleges, coached college for a couple of years part time, but needed a master’s degree to coach full time,” he explained.

He soon realized that coaching and teaching went hand in hand.

He was then hired as principal at Bennington Junior/Senior High School in 2016 and is excited to be a part of “Redesign.”

“(He said) we need to redesign the way we do school,” Nightingale said of Watson. “He and his assistant went around the state for opinions and developed a list of items that public schools were lacking in. They came up with a concept, an opportunity for schools to be a ‘Redesign’ school. They want us to reinvent our school to do something radically different.”

The initiative began in August 2017. Students, parents and patrons were surveyed and asked what the school as a whole needed to do better and what they were doing well.

Nightingale explained, “We’re blazing the trail because there aren’t really any guidelines. We’re trying to do things no one else has done, to revamp things.”

“‘Redesign’ is the plan that the state is on now where we prepare high school graduates to be prepared to enter the workforce,” he explained.

Throughout the project, Nightingale’s goals are to break the mold. “The way we do school with desks and rows, that came out of the 1800s, so school has actually stayed with that form for more than 100 years. While jobs are continuing to change, careers have changed — but we haven’t changed how we do school.

“We have to ask ourselves, ‘How do we get students ready to step into the world for jobs that haven’t even been invented yet?'”