Marjorie “Marge” Chance died March 15 at the age of 93. She was the epitome of a civic leader and will be missed greatly in the Newman University community as well as the Wichita community.

Marge made a mark so great on Wichita that she was recruited to be a part of the Newman University board of directors in the 1970s. Laurie Bell, Newman alumna and associate board member at the time, knew the impact Marge could make at Newman and was the one to suggest that she be asked to be on the board of directors.

Marge joined the board and made quite an impact at Newman. While on the board, she was involved in many plans and decisions that helped better the Newman community and ultimately change the course of the university.

Marge played a vital role in the implementation of the nursing degree program, now one of Newman’s most popular majors. A spring 2015 Newman Magazine article written about Marge reads, “While pre-nursing, first-aid and – briefly – nursing, had been taught at Sacred Heart Junior College in the 1930s and 40s, the programs slowly phased out and were discontinued by the early 1950s. It wasn’t until the late 1970s that nursing came back to Newman, thanks in large part to Marge.”

Marge knew firsthand the importance of nursing; she had received a nursing diploma from St. Francis Hospital and began working there before starting her family. Though she became a stay-at-home mother, she stayed connected to St. Francis throughout the years by holding a place on its board of directors.

The level of education that nurses needed to become certified increased through the years and St. Francis was struggling to provide the education and monetary assistance nurses had begun to need. Because Marge served on both the St. Francis and Newman boards, she found a way to bridge the gap. She was a very influential leader and helped pave the way for the program to benefit both Newman University and St. Francis. 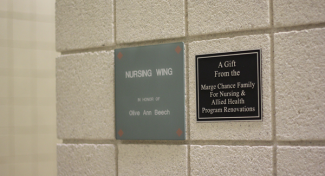 The Chance family has made many gifts to the University. In the west wing of Eck Hall, a plaque hangs on the wall to denote that the area has been named after Marge and her family for their contributions. In 2011, she received an honorary doctorate degree in Humane Letters from the university for all of her contributions.

Marge will be greatly missed by both the Newman community and the community of Wichita.