Mary Short began her college journey just like many others, but one thing sets her apart — Short is in her 70s.

She started out at Butler Community College in August 2012 and transferred to Newman University in January 2017. She is majoring in Interdisciplinary Studies, minoring in Spanish and is slated to graduate this spring.

Short is now 75 and excited to be nearing her long-anticipated graduation. “I’m seeing my life dream come true,” she said.

The motivation and support to attend college started with her husband, George, on New Year’s Day 2012.

George asked her if there was anything she hadn’t yet accomplished in her life that she’d like to do. She replied, “Oh yes there are two things: I’d like to have grandchildren and I’d like to have a college degree.”

George said although he couldn’t help with the grandchildren, he would help her get into school.

“I always wanted to go to college,” she said. “I always felt like I really missed something. I’ve had a lot of accomplishments … but that just wasn’t enough.”

Describing herself as a  “dye in the wool” Catholic, her first-choice college was Newman University.

She initially spoke to Assistant Dean of Adult Studies Teresa Wilkerson, who advised her to take general education courses at Butler and attend Newman to finish her studies.

As a non-traditional student with little need, there were no scholarships available for Short. Once Short saw the price of an education at Newman without financial assistance, she told her husband she could attend a different college. But George was adamant, telling her, “Your dream was to go to Newman, so you’re going to Newman.”

When Short started her courses at Butler, she was working for Enterprise Agency Inc., an insurance agency where she had started in 1962. She began as an administrative assistant, worked her way up to partner and eventually became president of the Agency. She has also served as president for other organizations for insurance professionals. She retired two years ago and is now a full-time student. Her years of experience accounted for 43 hours of transferred credit towards her interdisciplinary studies degree at Newman University. Short will spend only a year and a half at Newman to get her bachelor’s degree.

Not only did years of experience gain Short 43 transferrable hours, but her education through an organization called Chartered Life Underwriter (CLU) helped as well. A seven-year course must be completed to get a CLU designation. Short was highly involved in CLU and started with the goal to become president of the Wichita chapter. She was the first woman to work her way through all of the chairs. She spent a total of eight years holding various positions including program chair, secretary and vice president before finally becoming president.

Short had connections with many great speakers through her work in health, disability and life insurance. The first year that Short was program chair of CLU, attendance at seminars quadrupled.

“I feel pretty good about what I’ve done with my life,” said Short. “I’ve had a lot of accomplishments. I’ve been the first woman to do several things in this town that involved nothing but men in the insurance business.”

Getting a degree is important to Short but a major driving factor in her college education is the desire to learn her native language again.

“I lost my Spanish as a young girl,” she said. “I went to a public school and there were no other Mexicans.”

In the mid-20th century, racism was very much alive in her hometown of Newton, Kansas. In school, Short was treated poorly due to her broken English.

She said, “I came home from school and told my parents, ‘Don’t ever speak to me in Spanish.’ So they had to speak to me in English, and my siblings never learned Spanish.”

Even as a high school graduate, she felt the lashings of prejudice. Short was declined for a position that her high school business teacher had recommended her for. She said, “Right before graduation, she would pick one person from her classes and she would get them a job in an accounting firm in Newton. And she picked me.”

Short said the second she walked in the door for her appointment, the receptionist told her the position had been filled — but Short knew it hadn’t.

Short went on to attend the Wichita Business College for one year before taking over a friend’s administrative assistant position at Enterprise Agency Inc. She said, “I was really good, I could type 80 words per minute without a mistake and take dictation at 140 words per minute.”

Short said she’s working her way through college with the help of professors, classmates and her family, especially her husband. “I couldn’t have done all this without him, he’s just been wonderful,” she said. “The only thing is, he won’t let me stay up past midnight to study.”

Her daughter, Margaret, has not only helped Short with the technology aspect of going back to school but has also acted as a private algebra tutor, accepting payment in the form of home-cooked meals. Margaret is a math teacher and lives only five floors below her mother in an apartment complex.

“My kids are just so happy for me. And my Margaret, I wouldn’t be making it out of college if it wasn’t for her helping me,” she said.

One of Short’s favorite college experiences has been an eight-week service trip to Guatemala with Sonja Bontrager, assistant professor of Spanish, along with a small group of students in May 2017. “Because I was so enthusiastic about learning Spanish, I wanted to do total immersion,” she said.

Short met Bontrager on campus and recognized her from George’s church choir. The next Sunday at church, Bontrager brought Short the brochure for the Guatemala Study and Serve trip. George highly encouraged her to go on the adventure so she signed up.

The trip proved to be incredible in many ways for Short but the best part was making friends that became family.

“Being an old person in school, it’s hard to make friends with kids that are a third your age,” she said. “The oldest student (on the trip) was 23 and I thought, ‘Oh my gosh what am I going to do,’ and then we just became one big family. And now I see them all over campus and they’re yelling my name and waving — it just makes me feel like part of the school — like I really belong here.”

Short was amazed at how much of the Spanish language came back to her naturally while she was immersed in the culture. Her host family helped by having conversations with her and correcting her Spanish when needed. 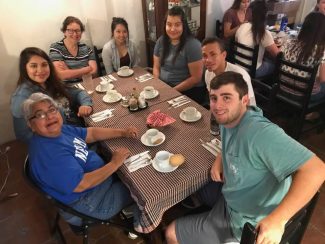 From helping teach English at schools to cleaning up garbage in front yards, Short enjoyed every bit of her trip.

Short will walk across the stage May 12, 2018, with her classmates and friends. It’s guaranteed that the class ring she purchased will be on her finger this day and every day after.