Newman University celebrated the graduating class of 2020-21 on Friday, May 7, at Hartman Arena in Wichita, Kansas.

Undergraduate and graduate program degrees were presented to the 2020-21 graduates during two separate ceremonies. In both ceremonies, Newman welcomed back graduates from 2019-20 who were unable to walk the stage in-person due to the ongoing concerns of the Covid-19 pandemic at the time.

More than 460 associate’s, bachelor’s and master’s degrees were presented to Newman University graduates. Though their journeys differ, the graduates who walked the stage had a common gratitude in their hearts.

Yudith Valerio, an elementary education major, graduated in December but received the honor of walking across the stage at the spring ceremony.

“At the age of 40 and reaching this dream that I’ve had since I was a little girl is just amazing,” Valerio said. “I have three boys at 20 and 18 and a 14-year-old, and I’ve gotten to be an example for them so it was worth the drive in being here today.”

Graduate Amy Valenti received her Master of Science in Education degree with a concentration in English for Speakers of Other Languages curriculum and instruction.

“My family and I made the special trip (from Riverton, Kansas) ,” Valenti said. “It was really important for me and for my children to see me graduate today. They didn’t get to see the first time I graduated, and now it’s come full circle and I really wanted to celebrate and have it mean something to them, too.”

The morning ceremony, which took place at 10 a.m. Friday, May 7, honored more than 220 undergraduates and graduates.

The ceremony included the conferral of an honorary degree and the awarding of degrees. Among those traditional pieces, a speech is traditionally given by the current Newman University Teaching Excellence Award recipient.

This year, the 2020 Teaching Excellence Award recipient was awarded to Professor of Biology Sarah Evans, Ph.D.

In nominating her for the award, colleagues wrote that Evans “combines service, intellectual curiosity and education excellence and behaviors that exemplify not only characteristic commensurate with tenured faculty but also with an intrinsically caring person that we can only hope our graduates will emulate.”

In her commencement address, Evans drew from a scientific principle her biology students are all too familiar with: homeostasis.

Homeostasis refers to the idea that living things can maintain a steady internal balance even in the presence of internal or external change. Evans said homeostasis can occur in anything from an individual cell to a stalk of grass, jellyfish or even a human.

So why talk about homeostasis at commencement?

“These last 15 months have been a time of much unexpected change for all of us,” Evans said. “I know students who have adapted to online learning, have dealt with significant financial changes, handled new family responsibilities, worked on the front lines, missed opportunities, handled isolation, heightened anxiety and depression ….”

“The future may seem to carry daunting challenges, but we are beings made for change,” Evans continued. “We are so very proud of you and all that you have accomplished. We are thoroughly excited to watch how you are going to go out into the world, maintaining homeostasis in all aspects of your lives and being leaders who will continue to transform society in marvelous ways.”

Every year, Newman awards an honorary degree to notable and accomplished members of the extended Newman community whose life and work reflect exemplary dedication to one of the university’s four Core Values: Catholic Identity, Culture of Service, Academic Excellence, and Global Perspective.

This year, Bishop of the Catholic Diocese of Wichita, Most Rev. Carl A. Kemme was bestowed with the degree of Doctor of Humane Letters, honoris causa. He received this honor for his dedicated years of service and leadership, as well as his remarkable representation of the Culture of Service core value.

Bishop Kemme has served as a priest and bishop for nearly 35 years, and was ordained as a priest for the Diocese of Springfield in 1986. In 2002, he was named a Prelate of Honor with the title Monsignor by St. John Paul II and His Holiness, Pope Francis, appointed him to be the 11th bishop of the Catholic Diocese of Wichita.

He currently serves on the Newman Board of Trustees, and supported the creation of the School of Catholic Studies by providing a Newman undergraduate education to diocesan seminarians in the St. Joseph House of Formation.

Bishop Kemme spoke to graduates about the important elements of every leader according to Pope Francis: to see, to discern and choose and finally, to act.

“It is not so much looking back at past accomplishments, however great those truly are, and certainly you are all to be commended for the hard work in making this day possible in receiving your diplomas, but rather you are commencing something new, a new chapter in your life,” Bishop Kemme said.

“I pray that from my simple words today, which come really from Pope Francis, you will see yourselves as those authentic, humble and heroic leaders we need you to be. I see by discerning and choosing and by acting. Pope Francis invites us in his meditation to dream. I invite you to commence.”

The afternoon ceremony for graduates took place at 3 p.m., honoring 224 candidates for both undergraduate and graduate degrees. This ceremony included a speech from the recipient of the honorary degree, the presentation of the Ablah Awards and the awarding of degrees.

Each year, a special award is presented to a female and a male graduate who exemplify the mission and spirit of Newman University and who show great promise to make a strong and positive contribution to society.

The Ablah Awards were established by Fran and Geri (Ablah) Jabara to honor the memory of Geri’s parents Harvey J. and Leona J. Ablah and to perpetuate their vision of entrepreneurism and the American dream. Award recipients must graduate with a minimum grade point average of 3.0 or higher, and each student receives a $2,500 award.

“This year’s recipients have made their marks on the entire Newman community,” Father Joseph Gile, S.T.D., said. “So much so, in fact, that when it came to the female winner, the committee decided for the first time in the awards history to present it to two deserving students.”

Upon hearing her name called as one of the two female award winners, Do said she was shocked.

“Whenever I give tours, I always talk about the Ablah Awards and I tell people it’s one female, and one male student,” Do said. “When they said that they were breaking rules this time with two female winners, my heart was racing.”

“It’s a privilege to be awarded this award with Gabby and with Cole.”

Do said her “degree of difference” reaches beyond the classrooms she studied in, and links back to the support she received from dedicated professors and peers. At the end of the summer, Do plans to pack her bags and move to Missouri where she will attend Southwest Baptist University for the doctor of physical therapy program.

Altenor says one of the reasons she came to Newman University is thanks to Karen.

“We went to high school (Kapaun Mt. Carmel) together and so we’ve known each other for a long time,” Altenor said. “Even when we were talking about this award, we were like, ‘you’re going to get it,’ ‘no, you’re going to get it.’ It’s just so amazing that the committee thought we were both worthy of having it in the same year. And it’s such an honor to be able to share it with her.”

Schnieders received the award named for Harvey J. Ablah. When he heard the two female names called, Schnieders thought that they werethe two chosen winners, he said. Then he heard his name called, remembered his vision blurring and hands shaking, then stood up to receive the unexpected honor.

President Kathleen Jagger, Ph.D., congratulated the graduates after making it official with the conferring of the degrees. She then talked about the Newman Code and what it means to the Newman family.

“The Newman Code was created by members of the Newman community to be a constant reminder of how each of us can live the mission and core values of Newman University in our own lives,” she said.

Jagger invited the graduates to recite the Newman Code as members of the Newman community. Graduates in the arena pledged to live in the spirit of critical consciousness, respect the dignity of every person, honor both personal and institutional integrity, and strive to embrace all humanity.

This was the first Newman commencement ceremony for Jagger. She described the day as “joyful.”

“It’s just a very unique experience for all of us,” Jagger said. “I’m grateful for these students, and that Newman had the opportunity to partner with them on their higher education journey. I’m proud of each and every one of them for making it through this challenging last 18 months or so.”

The complete ceremonies can be viewed on the Newman University YouTube channel.

Photos from the ceremonies can be viewed on the Newman University Flickr page. 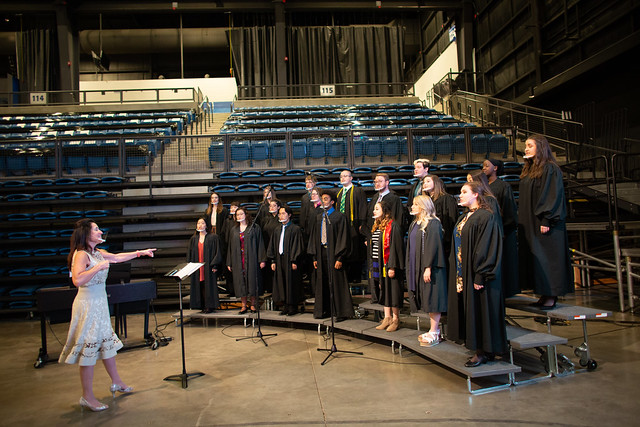