“Animals are such agreeable friends — they ask no questions, they pass no criticisms.” — George Eliot

Every person who owns a pet knows how special they are. The Newman University campus has plenty of furry friends around. Many live on campus with their humans who are staff members at the university. 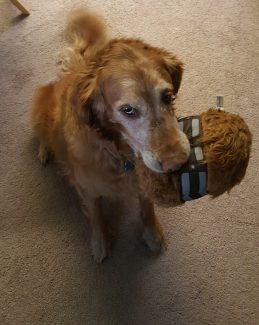 Daisy has been a part of Mudloff’s life since she was a darling puppy. He explained, “We were visiting some friends and they had a golden that had puppies and she was the last little girl so we had to have her.”

Daisy loves to take road trips, go camping and take walks around campus, and adores every bit of attention that comes from the students.

“She’s very much a puppy 10-year-old. Goofy as can be the day we got her, more energetic than when we picked her up, and she loves the attention. She doesn’t have a mean bone in her body and everyone is her best friend,” Mudloff said.

One four-legged fur-ball that is no stranger to the Newman University campus is Tucker. Tucker is a mix of Maltese and Yorkie and is full of mischief and energy. 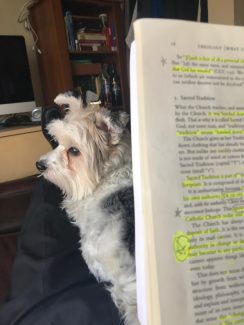 “Lucas got Tucker my second year here and after a couple months he found out that he was allergic to Tucker,” Fogliasso explained. “He has had dogs all his life growing up and somehow he developed an allergy. So he came to me and said, ‘I can’t have Tucker anymore. I know that you said you liked him, would you care to adopt him?'”

And so the journey of a faithful friendship began.

“If someone watches him for me,” Fogliasso said, “I always remind them to please close their bathroom doors because he loves to take the toilet paper, put it in his mouth and run through the apartment to where it just becomes a mess.”

Tucker not only keeps everyone on their toes but also is a great help to Fogliasso and the students.

Fogliasso explained that Tucker is often a great ice-breaker. “When students approach this very good-looking dog, they later are willing to talk to his handler, a Catholic priest. When without the dog, it can sometimes be a little uncomfortable to approach a priest and introduce themselves.

“He’s been very helpful with getting to know different students. Students also tell me how Tucker helps satisfy their longing or missing of their own dogs,” Fogliasso added.

Another furry friend you can find around campus is the beautiful boxer-pit mix, Aurora Monroe. 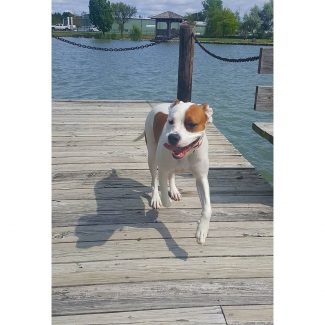 You can usually find her walking around campus or chasing squirrels and playing fetch on the practice soccer field with her best friend, Devin Smith, graduate assistantship – diversity.

When she’s not chasing squirrels, Aurora Monroe loves playing to her heart’s content and making memories with Smith at the dog park.

“I remember the first time I took her to the Meridian Dog Park when she was younger,” Smith recalled. “This was her first time being around a group of dogs. There were so many dogs there that day, as soon as we got out of the car you could see her eyes get so big.

“I let her loose to go play and she was so excited she didn’t know where to begin playing. An hour and a half later she had run all over the park, jumped on big dogs, small dogs and other people, and was lying in a mud puddle because she was so tired. On the ride home, she passed out covered in mud with a big smile on her face. It was an amazing time.”

They may not be categorized as pets since they won’t let you get too close, a number of cats greet  students, staff and faculty now and then.

One can usually find them hanging around outside the campus security office and Mabee Dining center. The buildings sit next to each other, and a few staff members from both areas take special efforts to make sure the cats are well taken care of.

Alicia Camacho, a full-time staff member at Mabee Dining Center and also a senior at Newman working on her degree in counseling, is one of the very few people who are able to pet and hold the cats.

She said she enjoys being a part of taking care of the campus cats.

“For me, they add happiness to my day,” Camacho said. “Just seeing them and how beautiful they are. When I come to work every day, they are sitting at the doors (to Mabee Dining Center) waiting for me. It’s like having my own personal pet where I work, where I go to school, it just makes my day more exciting.”

The cats have been around for many years and recently have added to their family. During the summer of 2017, a combination of staff and students were able to rehome seven kittens.

Dana Beitey, who works in University Relations, said not one day goes by without being thankful for becoming one of those kitten’s humans.

On a storm-filled day last May, a couple of students found a kitten who had somehow gotten separated from its litter. They took the kitten to Morris “Mo” Floyd, director of security, and Beitey caught wind of the news.

She said after visiting the kitten, she couldn’t bring herself to put it back outside but instead decided to give it a home with her family, which already included a dog and cat.

“We named her Stormy since that is what was happening the day she was found,” explained Beitey. “She’s a wonderful pet — very friendly, floppy and cuddly, good with people.

“She’ll be 1 year old in April, so she’s pretty mischievious, still having some of that kitten friskiness. Our other pets get along with her just fine. Although, the older cat does get a little annoyed by her new little sister sometimes. But isn’t that what little siblings are supposed to do?”

Beitey said she was even surprised to find that Stormy is trainable.

“She claps on command and we’re currently attempting to train her to sit. So far, it’s going pretty well.”