The Steckline Gallery at Newman University presents “Just Don’t Get Arrested” by Thomas Murillo, the fourth exhibit of the gallery’s 2010-2011 season. Murillo’s street art will be on display beginning with an opening reception from 5 to 7 p.m. on Friday, Nov. 26, as part of the Wichita “Final Friday” art gallery crawl. The exhibit will run until Dec. 22. 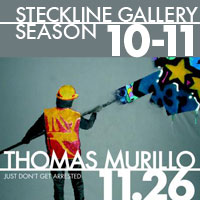 An “Art for lunch” event related to the exhibit will take place from noon to 1 p.m. on Tuesday, Nov. 30. A light lunch will be provided on a first-come, first-served basis. The opening reception, “Art for lunch,” and admission to the gallery are all free and open to the public.

Murillo grew up in the Wichita art scene as the son of Wichita artist Steve Murillo. Thomas Murillo drew with graphite early in life and bought his first digital SLR camera at the age of 16. In April 2009 some of his photographs were featured in a successful art show in Wichita.

Afterwards, however, Murillo became increasingly interested in street art, or works created in and for public spaces.

“I adored the stencil works of both Shepard Fairey and Banksy, so I decided to take a stab at this new medium,” said Murillo. Murillo learned the medium and made stencil paintings in that style, such as the work that will be on display in the gallery.

In spite of his newfound love of street art, his background in photography hasn’t been forgotten.

“From photography I gained knowledge of Photoshop in order to change my photos into a vector form which allows me to cut them out on a large-scale stencil and use spray paint to create a vector monochromatic painting,” he said. “These stencil paintings also have incorporated the same style that I have used in my photography of choreographing a specific model or scene.”

About the work that will be on display in the gallery, Murillo said it “explores an enlightened content of human brilliance, life force, and energy, in color and graphic silhouettes.”