Senior Noel Torres is the first Newman student to become a national champion in the NCAA Division II.

Torres won the 184-pound national championship at the 2018 NCAA Division II Wrestling Championship in Cedar Rapids, Iowa during the second weekend of March.

According to the official Newman Jets website, “The redshirt senior countered a takedown attempt midway through the third period and turned it into a takedown of his own to lock up a 3-1 victory over Colorado State-Pueblo’s JaVaughn Perkins at the US Cellular Center.” 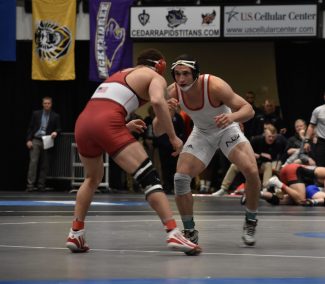 Head Wrestling Coach Ryan Smith said, “His win is huge. We’re excited for him and for the program. If you dedicate yourself and do everything right then incredible things can happen.”

Torres began wrestling in the eighth grade at Emporia Middle School. When he came to Newman, he decided to pursue an undergraduate degree in management information systems. After earning his undergraduate degree, he has taken double credit hours to earn his MBA in Business Analytics in just one year, which he will finish this summer.

During his busy school schedule, he still made time to work extra hard on his wrestling technique.

“During the season you fine-tune your technique,” said Torres. “You have to practice every day, build new skills, and improve on the areas you’re not really good at.”

In response to what Torres’ win means for the wrestling program, Smith said, “The process we have in place is working. We’re going to continue to build off of it and it’s going to start a new dynamic for the program.” 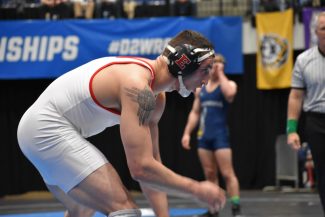 Reflecting upon his win, Torres said, “It felt great. I felt like I finally did it. I was really happy I could do it for my family and all the people that supported me. I want to thank my coaches who were there for me during those extra technique sessions, the university and my teammates.”

This spring, Torres plans to work full time at Koch Industries. He will also make the transition to mixed martial arts. Torres hopes to stay on with the wrestling team in a mentoring capacity for his younger teammates and new entries into the program.