The salvage yard next door to Fugate residence hall is finally in the process of becoming the property of Newman University.

The university has held an interest in purchasing Koon’s Salvage Yard for some time now. Vice President for Finance and Administration Jennifer Gantz has been trying to contact the owners since she started at Newman five years ago, and others before her had done the same in hopes of purchasing the property.

Gantz said, “Any space close to campus is property we are interested in. We’ve been reaching out to the owners for several years and last June they reached back out to us to let us know they were interested in selling the property.”

The big question is what Newman will do with that property. The answer isn’t quite clear yet.

Gantz said, “We are not 100 percent sure what the plans are for the property. It’s been proposed that we add additional parking in that space, but nothing has been definitively decided.”

However, plans will include at least the cleaning up of the old salvage yard. 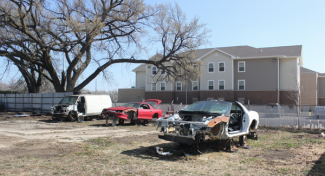 Purchasing a property is not just a simple money transaction for Newman. Like any property purchase, surveys and tests are conducted to ensure that the property is in good condition. In the case of the property being a former automobile salvage yard, these tests are imperative.

Currently, Newman is working with Baughman Co., which is doing a survey of the land. GSI Engineering is in the process of performing the first two phases of the project, which includes soil testing, water testing and more.

Director of Facilities Bruce Sanderson said, “The phase one study involved a search of the ongoing and previous uses of the assessment site, adjoining properties and other significant off-site environmental conditions.”

The first phase consisted of a historical review, which assesses the property all the way back to its first developed use in approximately 1940. A regulatory records search was done to determine if there were any spills or leakages of any kind on the property. The current owners were interviewed as well to recount the history of the property themselves.

“The study determined that a second phase was a necessity, due to the property’s history of being an automotive salvage business,” said Sanderson.

Phase two consists of soil and water testing to determine if there are significant environmental issues that would create a need for remediation.

The fieldwork for the second phase consisted of five soil probes 8 feet below ground surface and three water boring locations drilled to a depth of approximately 15 to 20 feet.

Sanderson said, “Both of these tests are being done to determine if there is soil or ground water contamination such as petroleum hydrocarbons, or semi-volatile or volatile organic materials.”

The test results should be available soon and the final summary report done by April 1.

A 90-day waiting period is implemented for all of these surveys and tests to be completed. With the waiting period, the property will officially be owned by Newman University by mid- to late-April.