On. Oct. 2, Newman University received a visit from Chinese representatives of the Wichita Area Sister Cities (WASC) — a nonprofit organization that serves to facilitate relationships between international communities.

Wichita is “siblings” with four international cities including Kaifeng in China, Orléans in France, and Cancún and Tlalnepantla de Baz in Mexico. President Dwight D. Eisenhower launched the Sister City International organization in 1956, and since then, WASC has encouraged ordinary citizens to engage in the advancement of peace and friendship through cultural, educational and business exchanges around the globe.

The recent delegation focused on future cultural and educational exchange opportunities between Newman and universities in Kaifeng.

“This particular event was really interesting,” Dean of the School of Education Cameron Carlson said. “The representatives from Kaifeng were very intentional about trying to figure out where they could partner, so they visited Newman, Wichita State University and Friends University.”

“We discussed the possibility of partnering with universities in Kaifeng that would allow our students to study abroad and would also allow their students to study here,” Golden said. “China has a great presence in the world and an extraordinary culture and economy. I hope the meeting will bear fruit such that our students will be able to study in China.”

The meeting was an initial exploration, so it involved looking at different areas Newman is currently working on as a university and what could potentially be worked on in collaboration with WASC, Carlson said.

Associate Professor of Education Huachuan Wen, who helped translate between the groups, said it was a particularly heart-warming experience for him.

“It is great, though not entirely surprising, to know that there are people like them who so enthusiastically hoped to help realize the exchange of personnel and culture between US and China,” Wen said. “It is very encouraging and inspiring to me, especially under the current political and economic climate, and it is reassuring to know that there are still many students in China interested in furthering their study in the US.”

Carlson added, “I think there’s an openness and welcoming part on behalf of Newman to try and find some avenue for a beginning collaboration.”

In addition to discussing potential student exchanges, the group explored the idea of faculty exchanges.

“Faculty exchange programs often lead to student exchanges, so you’re building a network first,” he added. “It’s a really good experience for our students because their world will include China in it without question; the economies are just so integrated. We hope to better understand the different cultural customs, norms, how business is done and how to negotiate expectations that we have on both sides.”

Delegates of Kaifeng left Newman representatives with a small token: a string-bound paper booklet, including Chinese characters, writings and images that describe the cultures of Kaifeng.

“In Kaifeng, student exchanges are connected in a way that is an unusual dynamic from what we are familiar with in the United States,” Carlson said. “Education over there is the beginning of a pretty significant network that takes on a familial structure, and the teachers are very well respected. When a teacher walks into a classroom, the whole class stands up. When it comes down to it, they are the source of betterment for the family because not everybody is able to receive an education.”

Carlson explained that the education policy in China is intricately connected to its economic development. 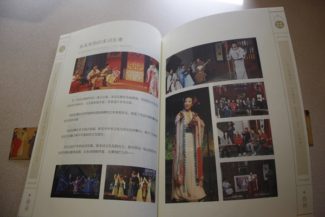 “They’re on a 50-year plan that all begins and ends with education, which is something I’ve learned greatly from. I have a lot of respect for the unity — they think a lot about economic education as a developed process together. They’re incredibly gracious with their hospitality, in what they do and how they do it, and the connections made are so important for success.”

He added, “When you begin to understand how to work with the different cultures in various places, you also learn about your own and how we are sometimes perceived by other countries. These are all things that are good for our students to understand, too, and will help to navigate their futures.”

Carlson said the next step will be a contact after representatives have returned to Kaifeng and spoken with their people.

“From there, they can start another round of conversations, which should be more focused in the next six months or so,” he said.