“The decade of the 1990s will be remembered in our community for many things,” said 1998 Provincial Charlotte Rohrbach. “One thing will be the complete renovation of our Province Center and, in particular, our worship space.”

The Sisters of the Adorers of the Blood of Christ (ASC) rededicated their chapel June 21, 1998.

Sister Mary Kevin, who will celebrate 70 years as an Adorer in 2019, explains the process, detail and story behind the stained glass windows installed in the gathering space of the Wichita ASC Center’s Chapel of the New Covenant.

When Rohrbach became the provincial of the Adorers in 1996, she told the sisters it was time to look at the chapel.

Rohrbach told them, “The Documents of Vatican II invite us to a different take with the new, in-depth understanding of the Paschal Mystery. Not only is it crucified but it is Risen — the Christ, the whole mystery.”

Claire Wing is the liturgical stained glass artist behind the biblically inspired depictions in the windows and doors at the entrance of the chapel. She presented her finished artwork to Adorers in the gathering space in March 1998.

“Claire, in herself, is an experience,” Kevin said. “When I am with her, I experience the presence of God because she’s so in tune with her work, her ministry, the expression of her art.”

Before she officially began working on the stained glass windows, Wing returned to her pastor in Dallas and asked him to tell her everything he knew about “covenant.”

Wing’s pastor sent her to Scripture, where the main covenants between God and humankind are recorded. Uwing her creative abilities, Wing crafted colorful windows infused with symbolism from biblical stories. 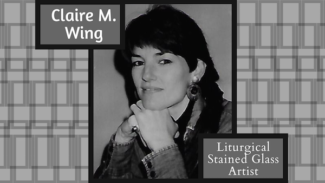 She captured the essence of tales such as the tree of life in the Garden of Eden, Noah’s Ark, Abraham and his descendants, blood sacrifices, the exodus of Moses’ people and the 10 commandments. The centerpiece of the double-door installation represents Mary’s invitation to be the Mother of Jesus Christ.

“All of these stories we’ve told up to this point are invitations,” Kevin said. “God never forces us. God always invites us and then awaits whatever our response will be.”

“(Wing) told us that in her experience, people often accuse Catholics of adoring Mary,” Kevin continued. “In response, she tells them that we do not adore Mary. We adore Christ. And to show that, Wing put Mary’s head to the side and she’s saying, ‘Look, He who is mighty has done great things in me.’ It’s the wonder of being called — of being empowered — by God.”

Crimson, crescent-shaped pieces of glass decorate the windows to represent the bloodshed of the human and animal sacrifices, which were used as offerings to God.

“When Claire was explaining her masterpiece, we were all sitting around the stained glass and I said, ‘There’s just one little drop of blood left here and no more,’” Kevin said. “And Wing explained, ‘Right, because that represents Jesus’ self-gift. Once that gift is given, there is no more need for blood sacrifice. All is forgiven. All is healed. All is made whole.’”

On either side of Mary is a glass panel filled with white waves — a representation of angels’ wings. Just below these panels are two golden rectangles, each of which includes a special feature: open slits.

“Claire had us to touch the windows on these two areas, noting how they are open,” Kevin said. “They are open because this covenant is open to all people. This new covenant is for everybody — come one, come all.”

Wing used glass “raindrops” from her earlier window panels in the tale of Noah’s Ark to create a stylized crown of 12 stars above Mary’s head. She also incorporated gold, white and yellow movements to mimic the flow of the Holy Spirit.

“The spirit, all the energy of God and the life of God are, again, in the same symbols that she used earlier in the windows — the stars, the power signs,” Kevin said. “When something is so profound, you can’t see it, you have to use symbols.”

Blood is a very significant symbol in the ASC community, Kevin explained.

“Just like a ring is a sign, our hearts are a sign and blood is a perpetual — forever, for keeps — sign,” she said. “If you give your blood, you can’t get off the table and say, ‘Oops, I made a mistake. Give it back.’ Because it’s given. It’s permeating the life of the other person.”

Kevin noted another feature that has even greater significance to her as an Adorer of the Blood of Christ.

“All around the outside of the story of (the) covenant is a red trim that represents blood, or your total self,” she said, pointing to the crimson detailing along the wooden doorframe. “You can’t say, ‘Well, you can have this much of me, God — my little finger or maybe my hand.’ It’s all. Blood represents all. I give you all. Just like (God) gave all to me.”

Scripture writes that when Jesus was about to die, he “handed over his spirit,” which Wing shows through the gold and white. Scripture also states that “Out of Jesus’ heart came blood and water,” Kevin said.

“That represents symbolically, the sacraments, the blood, the Eucharist, the body and blood of Christ and the holy water of baptism,” Kevin said. “We use these signs because it’s too big to say God lives in every one of us. God has chosen us. He is our father, our mother, our source.”

Wing is also responsible for the stained glass art in the new confessional space for the sisters.

She picked up the flow of the Kansas wind in a field of wheat and did so in a way that allows light from the chapel to make its way into the confessional.

“We celebrate our return to covenant living more fully in here — our confessional,” Kevin said. “The old confessionals used to be dark, but this one is full of light and has a very special feature.”

One of the housekeeping staff accidentally bumped the base of the glass as they were cleaning, but the crack has turned out to be Kevin’s favorite feature of the confessional, she said.

“I think it’s perfect,” Kevin said, pointing to the crack in the glass. “I hope we never fix it because we’re all a little bit cracked, aren’t we? That’s our story. We’re not perfect, God is perfect. And we can return to him in here.”

Wing, who has completed projects in several states including Michigan, Texas, Louisiana, Illinois and Ohio, said her art is what she has been given to contribute to this common commission.

“We share in the commission given to us by Christ to help move each other’s hearts, to build up each other’s lives in God, through love,” Wing explained. “In turn, as I come into the life of the congregation that I serve, the contact builds up my life. It is reciprocal. I have now (surpassed) 20 years working with glass. It remains an incredible privilege.”

Kevin pointed out that, when God makes a covenant with his people in Scripture, there is always a sign of his promise.

She added, “When you know what’s behind the signs portrayed in the windows, oh, that’s profound.”

“Many played a significant role in the accomplishment; one of their rewards is the completion and rededication of the chapel as the Chapel of the New Covenant,” Rohrbach said. “On behalf of all of us, I wish to express to each of them our extreme gratitude, which we hold in our hearts for all their time and efforts on this renovation project.”