A favorite advisor, professor and friend of many passed away last week, at just 36 years old.

While I could attempt to muster up words to give Dr. Suzanne Berg the credit she deserves for being the passionate, intellectual, joyful, empowering, compassionate, spunky, stylish, beautiful and quirky woman she is, I’d rather let her words speak for themselves.

This is an article I wrote after a two-hour profile interview with Dr. Berg last spring as part of my Feature Writing course final. Aside from minimal revisions, it was last edited on May 9, 2017.

Up until this point, it has never been published or printed because it is quite long, but rightly so – this is a woman whose soul cannot be captured in any amount of earthly words. I wanted to share my writing with those who are interested. Dr. Berg will be missed dearly and eternally loved by those who felt her presence in some way.

Along with a Cherry Coca-Cola and dress up magnets of Michelangelo’s “David” statue, Dr. Suzanne Berg has a uterus on her desk.

Although she would not describe herself as an “activist,” Dr. Berg does consider herself a feminist who studies technology and the problems of it. She is known for being an advisor, professor and a supporter of equal rights and anti-discrimination, both on campus and in the Wichita area. Dr. Berg makes it a point to push societal issues outside of the classroom and challenges her students to do the same.

Just this year, Dr. Berg helped Academic and International Advisor Ami Larrea start the Black Student Union, or BSU, at Newman. Its mission is to provide an environment for students to come together and be intellectual, cultural and social while promoting academic excellence and activities of cultural and educational benefits. The club aims to create a positive image for African-Americans in society through community outreach, student empowerment and leadership.

“Dr. Berg has been very supportive of BSU,” Larrea said. “She attends meetings, gives suggestions for events, spoke at the Lift Every Voice event in the fall semester, and contributes to our group in so many different ways. She has also been very supportive of the other multicultural group events on campus, by bringing her students to the Multicultural Leadership Organization International Luncheon last month, supporting the Asian Student Association fundraiser and generally being supportive of all our various groups on campus.”

Dr. Berg is also the faculty representative for the Communication Club at Newman, which is a club designed to give students the chance to talk to professionals in the communication field.

“After the election, I remember her telling us that she signed up to help at a women’s health clinic,” Junior Emily Harvey said. “Dr. Berg said the most important thing we could do was to get involved in an organization that we care about. Ever since I’ve known her, she has expressed the importance of gender equality. She’s just so open-minded and honest. Whether it’s school-related or personal, she is always willing to go the extra mile to help you out.”

“Ultimately, I am an educator,” Dr. Berg said. “At Newman, the goal is to empower our graduates to transform society, and I feel it is my job to get people to the ‘transformation’ portion of this— to help them see things in a new way.”

Dr. Berg earned her bachelor’s degree in speech communication in 2003 and went on to earn her master’s in 2006, both from Minnesota State University, Mankato. In 2013, she earned her Ph.D. in media and communication at Bowling Green State University. Throughout her career, Dr. Berg has published many book chapters, electronic publications and even a law review.

Two of her awards include the Women’s Studies Research Symposium Top Paper Award and the School of Media and Communication Excellence Award, which were both received in 2012 from Bowling Green State University. She continues to instruct workshops, presentations and several communication courses for undergraduates.

“High school education equips you enough, but college changes your worldview in ways that make you uncomfortable,” she said. “First, I think you need to read in order to figure it out for yourself. Second, you have to listen. You have to be willing to ask peers in a non-ego-judgemental way, ‘why?’”

We all remember the dress— the famous photo that some argued was a white and gold dress, while others were certain it was blue and black.

“The dress was the perfect internet firestorm,” Dr. Berg said. “People could get angry over nothing. This was a clear way to see that the way you view the world is not the same way the person sitting next to you views the world. This leads me to ask, if your eyes can fail you, then what else can? What else are you unwilling to see?

Dr. Berg’s Group Communication course this semester focused on educating students about racism and how to stand up against it in today’s society. Some of the student-organized events and social media outlets included “Shattering Stereotypes,” “Bake and Tell” and “Donut Stand for Racism.”

“That is why I teach these classes— so we can have these discussions,” she said. “None of these people who made civil rights progress are perfect. [I’m] trying to be a human that moves a movement forward and to show the long-term effects of these things— showing that significant social changes matter.”

One thing that makes Dr. Berg tick is “microaggressions.”

“These are the moments when people do not realize they are shoving you into a box you don’t want to be in,” Dr. Berg said. “Sometimes you have to push back.”

When her son was born, she overheard the male anesthesiologist say the phrase, “Oh, you girls” to the female doctors and nurses.

“This is a room of women who are at the top of their game, performing, and he wanted to sit there and disregard these women in this moment,” she said. “How many times do we have to add these [microaggressions] up? That is what gets to me.

“I will sometimes talk to my husband and ask, ‘Was I crazy to have this reaction in this moment?’ Then he will pause and say, ‘No, that was the appropriate response.’ Some people say it does not matter to them, but maybe it should matter. These little things added up can start to chip away.” 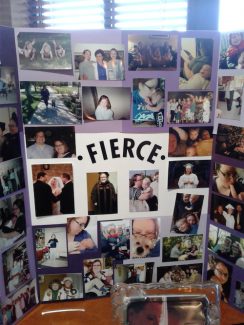 Dr. Berg said she will continue to ask these questions that articulate the way we approach these problems.

“It’s all about processing and never being done with it, and we are always in process.”

Although Dr. Berg is very involved with students, faculty and organizations on campus, she says that being a parent takes up the majority of her energy. She is the mother of her 4-year-old son, William Eugene Berg III, and 1-year-old daughter, Lorelei Allison.

Back in January, Dr. Berg wanted to round up her family and participate in the local Women’s March. Her husband’s only concern was whether or not the weather would be nice that day.

“I am lucky to be in a relationship with a person who is a true partner,” she said. “He makes life easier in ways that are difficult to explain to others.” Dr. Berg and her husband, Bill. will have been married for 12 years in May.

In her free time, she and her husband enjoy cooking meals together. They proudly wear the self-proclaimed title “World’s Worst Vegetarians.” In addition, Dr. Berg is a huge “Star Wars” fan, loves the show “RuPaul’s Drag Race” and is currently rewatching “Crazy Ex-Girlfriend.”

She sometimes likes to address issues by taking an artistic approach. Even though she says she cannot paint, she enjoys knitting— especially “vaguely feminist-themed things.” Dr. Berg said she loves knitting because it relieves her general stress, and turns her anxiety into a useful object.

“I knit several pink hats for people,” she said. “But I actually learned to knit in the round not by making hats, but by making tiny uteruses.” The red-knit uterus on display on her desk is one of the many she has crafted.

“Once for a bachelorette party, I knit a dozen of these and we sold them instead of lollipops because let’s avoid sex jokes and let’s embrace the art of being a woman,” she said. “I like taking a resistant approach to different ideas.”

This summer, Dr. Berg will be co-editing a book with Dr. Olivia Conti, a rhetorical critic. She will also teach two summer courses for two days a week, starting next month. She will primarily be writing in her office and plans to spend the rest of her time cleaning her house, gardening, running and taking some “good ole’ me time.”

“I am thankful that she is one of my most trusted friends who always tells it like it is,” Larrea said. “Newman University is lucky to have her here as a faculty member with the expertise she brings in her field as well as the good heart that she has for our mission to transform society.”

In my three years as a student at Newman, I have been privileged to form connections and relationships that I wouldn’t trade for any other college experience. Dr. Berg’s presence at Newman stands out for her ability to be fierce, to challenge students beyond the walls of the classroom and to be unapologetically herself every minute of every day.

She wasn’t afraid to call someone out when he or she was being unjust or when they handed in work that was sub-par. She drew the best out of people by sharing her personal stories, theories and other insights, and created an environment that helped others feel comfortable enough to share their own.

She  inspired others to not only reach their full potential as students and professors but as people. She was a daughter, a mother, a sister, a friend, an ally, an advisor, a professor and way more — and in my experience, she somehow managed to exceed her potential in every single one of these categories.

Dr. Berg may be physically gone, but her spirit continues to shine on this campus and on those who had the beautiful opportunity to meet her. I hope she catches a glimpse as to just how many individuals she has inspired to share their own vibrance, both directly and indirectly, because thanks to her — we will.