When Ashley Schaal began her higher education journey at Newman, she didn’t think she would be traveling across the globe to enter into mission work before starting her career.

Ashley celebrated her Master of Social Work (MSW) degree completion on May 11, 2018. She will be heading to Oregon in June to begin a three-month discipleship training. She will then travel overseas for an additional three months of mission work. She will learn the location of her mission work within the first few weeks of her training.

Ashley’s spiritual journey began at a very young age. She attended a Methodist church with her family all through her young life, but said it never felt right. Ashley came from a broken home — one full of abuse and addiction. She said attending church every week actually upset her.

“I was very angry when I went to church because there was fighting and abuse in the home,” Ashley explained. “But then we’d go to church and we acted like nothing was wrong. You pretend and put on this facade. And I would just think, ‘Why are we doing this? You’re supposed to go to church because you’re broken. Jesus even went to the broken.’ Because of that, I ran away (from church) and I spiraled out of control.”

But Ashley found her faith again after a significant life event landed her in the hospital. Ashley had just been told by the family she was staying with that she could no longer live there.

“In 2014, my birthday, a big event happened that shattered my world,” she said. “I was put into the hospital. I was alone. I didn’t have a home. I wasn’t really sure what was going to happen.

“I remember sitting there thinking, ‘God this is yours now. I’m done, I can’t carry it. I don’t want to.’ In that moment, I felt completely different. There are still times when I’m afraid and I’ve even questioned my faith, but then there’s a spark, a song, something that reminds me, God is here.”

After that, she said she felt an overwhelming peace and knew everything was going to fall into place. She reconciled with her mother, lived with her for a while until she could save enough to move, got a place of her own, but then that fell through.

Ashley found herself living out of her car. Shortly after, she found Newman University. She decided to transfer from Butler Community College.

“I honestly didn’t want to come to Newman at first — mostly out of stubbornness. My parents came here, and I wanted to do whatever was opposite. But then I talked to Jacolia Cole (a Newman transfer counselor at the time) and I told her what I eventually wanted to do. My plan was to be a therapist at my own private practice. She told me about the addiction concentration. But I had a completely different idea of what addiction was.

When I got into the classroom, we had to look at ourselves. I come from a history of addictions, but I shut it out. I sort of fell into that degree because it was a steppingstone. I was a cutter when I was in high school. So yes, I had an addiction problem. Not with drugs or alcohol, but with the cutting, it was more like I needed to do that because it made me feel something. I was so numb.”

Even though Ashley didn’t have confidence in knowing what her future held, she said looking back now, she knows that Newman is where God wanted her to be. She completed her Bachelor of Science in counseling and then moved on to her MSW degree.

“I’m definitely not the same person now than when I first arrived,” she said. “During my undergrad, I had to do a lot of digging into myself. In my master’s, too. But I think I did the most work in my undergrad. I was just leaving the dysfunction of my family.

“God planted me here because this is where I needed to work on relationships, become more confident in who I am, to be able to stand up for myself and be assertive, but tactfully instead of just blurting out what I was thinking. Looking back on the last four years … there’s been a lot of change and transition, which has taught me a lot about how I handle change.”

During her master program studies, she and her classmates began working on a major project in order to understand the Newman mission. Ashley said she experienced an eye-opening moment as she dug deeper into the university’s mission statement.

“We brainstormed about the mission and what it means to different people. That was a little of a defining moment for me. I knew my goal is to transform society when I leave here.”

Going through the program, she said she became a self-starter, her confidence and ambition growing the whole time. Ashley also said she gained a group of friends that felt like family and learned a lot about herself along the way.

“We had to write this origin of family paper, and you definitely see where your patterns are. I learned what my defense mechanisms are and discovered that I’m closed off and anxious because of certain things I’ve endured throughout my life. In this curriculum, you have to look at yourself, because if you can’t do that, how do you expect a client to look at themselves. If it’s scary for us, it’s scary for them, too.” 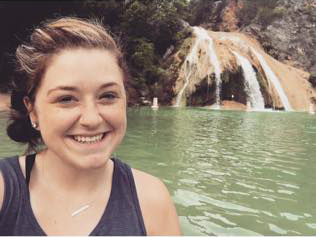 About a year before she was set to graduate, Ashley was thinking scrolling through her Facebook feed, feeling a little discouraged at the same time and unsure of her future, when she realized she had accidentally clicked. She was just about to leave the site when something caught her eye.

“Do you want to delve into God’s word?”

The ad was from the organization Youth With a Mission (YWAM). She immediately began reading, and the more she read, the more she felt a calling happening. She even asked for advice from her Bible study group the following week.

She said, “I remember telling them the story and asking them if they think this is just me wanting to run away from things or if it’s something I’m supposed to do. I said to them, ‘Please tell me it’s not because I’m terrified.’ And they just responded with, ‘Um, I think you’re supposed to do this.’”

She started praying heavily, asking God to open doors if this is what was meant to be. And then door after door began opening.

“Once I let God in, it was crazy. My flesh was terrified, but my spirit was telling me it’s my calling. God slammed me with truths so I knew this is what I’m supposed to do.

“I’ve been saving for a year. I sent out letters to people at church. I’ve saved my tax money. McDonald’s money. Anything I could do. I also do calligraphy art, and after posting some of that on Facebook, I started getting requests for commission work. So all that money has gone to this, too.”

“I’m very meticulous about money,” she said. “And I knew if I wanted to completely focus on God, I needed to raise all the money before I get there. If I don’t, I will be thinking about getting the money. So that’s why it’s been so important to save.”

As for what she hopes to gain from this experience, Ashley said she wants to be completely rooted in God’s word so that when storms come, she won’t fall over. And her drive to do mission work is effecting change.

“I think the one thing that led me to this is that I love seeing God work in the lives of others. With mission work, not only is it humbling for us, but it’s that I’ve always been led to wanting to help people. I want them to know life is hard, but you can overcome anything if you put your mind to it. Yes, I was driven to this journey to further my relationship with God, but getting to go out to see Him work through us will be a life-changing experience. The motto of YWAM is, ‘Know God and Make Him Known,’ and I think that’s exactly what we’re all called to do. I can’t wait to see what God’s going to do not only in me but in the lives around me.”

To follow Ashley’s journey, visit her blog, “Journey to My Promise Land.”