Commencement weekend was full of ceremonies, awards and celebrations for the 2018 Newman University graduates.

A Baccalaureate Mass was held Friday, May 11, and both the Undergraduate and Graduate Commencement Ceremonies were held Saturday, May 12. For the 2017-2018 academic year, 56 associate degrees, 273 bachelor’s degrees and 201 master’s degrees were awarded.

The Cathedral of Immaculate Conception was full of graduates, friends and family on Friday evening. Bishop Carl A. Kemme presided over the ceremony.

Ariana Esparza, a communication major, and Patricia Lujan, an education major at the Western Kansas Outreach program, provided reflections of their time at Newman during the Mass.

Esparza spoke of her time at Newman and said, “Thanks to Newman, I am now a better version of who I was.  … Newman saw something in me and gave me a place to be myself.”

Lujan had just suffered two major losses in her life when she began her second degree at Newman. She reflected on God’s timing and how blessed she was to have such caring and devoted instructors at Newman to help her through.

Lujan’s reflection can be found here.

Entertainment was provided by the Newman University Chorale, led by Director Deanne Zogleman.

Joshua Papsdorf, director of the graduate theology program and associate professor of theology, gave the commencement address. Papsdorf was the recipient of the 2017 Teaching Excellence Award, which is an annual award given to a full-time faculty member who has demonstrated an innovative or dynamic approach to courses, course revisions and teaching techniques.

In his speech, he urged the graduates to spend time thinking deeply about their goals in life. He was amazed at how many students had never questioned the lessons, the work and the energy it takes to gain their degree and begin their career in any chosen field but how few have worked through the process of critically assessing their primary goals in life.

Papsdorf said, “Over the past few years I have been continually struck by how much agreement there is on some very fundamental truths about life. Namely, it’s not riches, it’s not fame or career success that is going to make you truly happy. Instead, it’s things like close relationships, meaningful work and service to others. Or we could just abbreviate it all and say, love.”

He urged students to use the study skills they’ve gained over the years and apply them to the biggest questions in life in order to find happiness and do loving work.

“As you start to find some of those goals, find one small change you can make to your daily routine and do it,” he said. “Little physical changes to our routines can help us make good choices and ultimately grow in virtue.”

An honorary degree is awarded each year to notable and accomplished members of the extended Newman community whose life and work reflect exemplary dedication to one of the university’s four Core Values: Catholic Identity, Culture of Service, Academic Excellence and Global Perspective.

The degree of Doctor of Humane Letters, honoris causa, was bestowed upon Bob Voboril for his remarkable representation of the Catholic Identity core value.

The day held more than just this honor for Voboril — it was also his 40th wedding anniversary. He said, “This is, for me, after working 46 years in Catholic education, the capstone to a long and much-loved career.”

Voboril’s 46 years in Catholic education includes 43 years as an administrator. He has spent the past quarter-century serving as superintendent of Catholic schools for the Catholic Diocese of Wichita.

During his leadership, the Wichita Diocese Catholic school district, which encompasses 25 Kansas counties and more than 10,000 students, has thrived and developed a reputation as one of the best in the nation.

Voboril has shared his work locally and nationally through presentations, workshops, annual conferences and published articles. He was awarded the prestigious National Catholic Education Association’s “Lead. Learn. Proclaim.” award in recognition of his excellent and distinguished service to Catholic school education.

One male and one female graduate who exemplify the mission and spirit of Newman University, and who show great promise to make a strong and positive contribution to society, are honored each year with a special award.

“It means a lot to me,” she said. “Mainly, it’s just a token of my appreciation for everyone that has helped me get to where I am today. Everyone at Newman, my family and my friends, they’re the reason I was even up for this award.”

Detmer received admittance to the University of Kansas School of Medicine where she will begin her post-graduate work in July 2018. 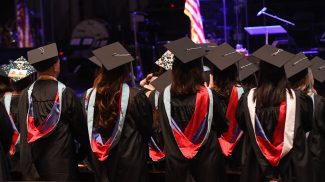 The Heart of America Men’s Chorus provided entertainment during the ceremony. Newman Director of Music Deanne Zogleman had the honor of leading the group, which featured newly retired Associate Professor of Education Steven Dunn.

Papsdorf again addressed the graduates, urging them to use the critical thinking skills they’ve learned at the university and apply them to their life goals.

Newman President Noreen M. Carrocci, Ph.D., announced a formal conferring of degrees, congratulating the graduates and welcoming them as “daughters and sons of Newman University forever.”

During her closing remarks, Carrocci said, “Look what you can do with your graduate degrees to transform society. You can help save a life, you can make a better business organization, you can be those education leaders and teachers and administrators. … Oh, I know the places you go will be great and so I urge you to continue your paths of working to make your communities better and to help your friends and families to do better.”