Alumna Emily Simon ’16 didn’t seem to get quite enough of Newman in her four years as an undergraduate student. Now, she is pursuing her master’s degree and is the new associate in the Dugan Library — teaming up alongside faculty members Jeanette Parker, reference and instruction librarian, and Steve Hamersky, director of library services.

We interviewed her to get an inside look at her new position and responsibilities, as well as her previous experience as a student at Newman.

NU: To start off, can you please tell us a little about yourself? Where are you from, what are your hobbies, interests, etc.?

Simon: I grew up here in Wichita. I’m the second oldest of six kids. I feel like I uphold some of the librarian stereotypes in that I have a cat I take way too many pictures of, I love to spend time at coffee shops and I have a reading list longer than what can be accomplished in a lifetime.

NU: Do you have a favorite book?

Simon: That’s always a hard question to answer for book-lovers. I have many favorites. I’m an embarrassingly big fan of “Harry Potter” and “Lord of the Rings.” Dr. (Bryan) Dietrich (Newman University professor of English) introduced me to “House of Leaves” by Mark Z. Danielewski my senior year. I don’t think I’ll ever get tired of reading that book. One book I read recently that was added to my list of favorites was “Mr. Penumbra’s 24-Hour Bookstore” by Robin Sloan.

NU: What was it like transitioning from a student to a staff member?

Simon: It’s been a little strange to be on the opposite side of the university since returning in September. I keep forgetting that I’m not a student anymore and it doesn’t help that I still look like one. I keep getting confused when professors and staff members refer to each other by their first names. I don’t think I’ll ever be able to call my professors by their first names. But I’m really glad that my first “adult” job is here in a community that I know — a community that still helps me grow and learn even though I’m not a student anymore.

NU: What role are you filling and what do some of your responsibilities include?

Simon: I’m the new library associate for Dugan Library. It’s actually a new position because Steve and Jeanette had too many responsibilities that their main job, helping students utilize the resources available to them, was becoming difficult. So I’ll be taking some of that pressure off their shoulders. I’ll be helping with the cataloging, managing student workers and probably most pertinent to students, managing interlibrary loan requests, among other things.

NU: What are you most looking forward to as a staff member at Newman?

Simon: I’m currently working on my master’s (online) in library information science (at San Jose State University), so this position really makes sense for me. I get to see a very broad overview of everything that goes into making a library run while also using all the new skills I’m learning. But I’m most excited first to be in an academic setting, and also to be under such great librarians as Jeanette and Steve. They’re always looking for new ways to help Newman faculty and students and so I know I’ll learn a lot under their care.

NU: When you were a student, what made you decide on Newman University as opposed to other colleges?

Simon: Both of my parents as well as my older sister attended Newman, so when it came time to think about colleges, I was most familiar with Newman. I had a really good experience visiting the college and was offered a scholarship that was difficult to turn down. I have to admit that I was a little apprehensive about the kinds of opportunities that I would get at a small school, but I didn’t want to travel too far away from home and figured I could always change schools later if it wasn’t a good fit.

NU: What was your experience like during your student years at Newman?

Simon: The funny thing is the reasons I chose Newman were not the reasons I stayed at Newman. The class sizes were small enough that I consistently experienced interesting and worthwhile discussions with my classmates. I actually got to know my professors and benefited from them knowing me. Even though Newman does not have as many study abroad programs readily available like a bigger university, I got to spend time in Japan and South Korea during my time here because I had professors, advisors and Adorers (Adorers of the Blood of Christ sisters) who cared about my goals and dreams.

NU: What kinds of activities were you involved in?

Simon: I studied English and history here, so I was involved with Coelacanth (a Newman University publication of student work) and I tutored at the writing center. I was a part of the honors program and probably played more Reacting to the Past games than any other student. I took some classes while here that definitely don’t fit in with the typical college courses but, as cheesy as it sounds, forced me to grow as a person — classes like Kelly McFall’s (professor of history) genocide course. And I’m not sure I would have had the courage to move across the world and live in a foreign country for a year if I had gone to a different college. I also worked in the (Newman) archives, which is originally what brought me back to campus.

NU: Can you expand on your experience with Newman following your graduation?

Simon:  I spent August 2016 through September 2017 teaching in South Korea. I knew I was going to need a job when I returned home but wasn’t seeing any openings in the Wichita public library system. Around that time, Diana Stanley contacted me and asked if I wanted to work in the archives temporarily since she would be moving on to law school. Since I had worked in the archives as a student, and because any experience in archival work would also be beneficial to my degree, I agreed. So I worked in the archives from the middle of September until I moved into the library position in December. 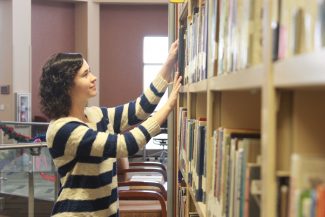 NU: What has been your favorite aspect of working alongside Jeanette Parker and Steve Hamersky so far?

Simon: Steve and Jeanette make a very good team. They have a good system going in the library. But they’re always open to new ideas and have encouraged me many times to add my own input. It’s a really good working environment. Plus, they enjoy “taco Tuesdays” as much as I do!