The Rev. Karen Lemon, an alumna of Newman University, received an unexpected calling from the Holy Spirit 24 years ago.

Alone in her home church, All Saints Episcopal Church in Pratt, Kansas, Lemon was discerning the Holy Spirit calling her to do something she had never contemplated, ordained ministry.

“I had always been active in and out of the church, but becoming a priest had never been on my radar,” explained Lemon. “So of course I said, ‘No, God you must be seriously mistaken.’ The Spirit was persistent, however, so I gave in and began to explore the possibilities of becoming a priest.”

And so, Lemon began her spiritual journey. She trained under her local priest and was ordained a deacon in 1998, and later a priest in 1999.

“At first I served as his assistant, then in 2001 became the vicar when he moved,” she said. 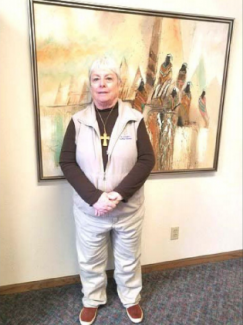 Most of what Lemon had learned since then has been in the nature of on-the-job training. She believed that even a seminary cannot prepare someone for all the things that will happen when one serves a church community.

Lemon voiced, “Most of the struggles have involved illnesses and deaths of people I have known for years, close friends. But that is also part of what I do that I wouldn’t trade for anything. Who better to minister to them than someone who knows and loves them?”

Lemon attended Newman University in 2003 where she began the pastoral ministry program and received a bachelor’s degree in 2006. She came back three years later and received her master’s.

“I enjoyed my time at Newman. I found the work enriching and very beneficial to what I was already doing. You can never have too much education. For the most part, the theology of our two churches is the same, and we had some lively discussions when it wasn’t,” Lemon recalled.

Today, Lemon still preaches at All Saints Episcopal Church in Pratt and still drives the 30 miles to Medicine Lodge to preach twice a month. She has also been participating in Lenten luncheons in both parishes for the last several years. The luncheons are sponsored by their local ministerial associations.

“It is a visible sign to the communities that our churches can and should work together. The freewill offerings taken up in both places help the associations with their missions of helping the poor and those in need,” Lemon said.

She added, “It has been an interesting journey so far and I hope, by the grace of God, it will continue on.”