Kelly Belanger, Ph.D., English professor at Valparaiso University, will speak at Newman University at 7 p.m., Sept. 11, in the Bishop Gerber Science Center, room 105. The event is free and open to the public.

Belanger teaches interdisciplinary humanities, professional writing and rhetoric, and also directs the university writing program. She also serves on the Committee for Intercollegiate Athletics at Valparaiso.

The subject of her keynote is derived from her book, “Invisible Seasons: Title IX and the Fight for Equity in College Sports,” in which Belanger tells the story of how the Michigan State University (MSU) female athletes helped pave the way to a future with more equality between men’s and women’s athletic programs.

Belanger attended MSU from 1982 to 1986 and played basketball at the university, achieving Academic All American status in 1985. 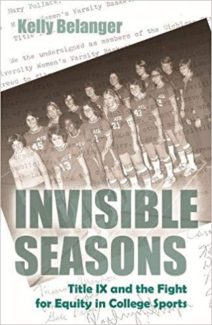 “My goal in the book,” she explained, “was to educate readers about Title IX through a narrative of a specific institution where I was a college athlete myself. The cast of characters involved with MSU’s Title IX story was particularly unique but also in many ways reflective of the roles played by counterparts at most other schools in the first decades after Title IX was enacted and when schools were needing to figure out how much they would need to change to provide more opportunities for women students.”

Belanger said writing her book on this topic was a fit for her both personally and academically.

“Initially, I wanted to find a research project that mattered a lot to me personally and connected with my life experience. As someone who studies rhetoric and writing, I was interested in discourses surrounding social change.”

During her keynote, she will discuss the book, her research process while writing and share documentary video footage along with footage from interviews conducted during the early years of fighting for equity in college sports under Title IX.

“I hope the audience comes away with a deeper understanding of what Title IX requires for college sports and also an appreciation for the tenacity, persistence and struggle that has made today’s athletic opportunities for girls and women possible.

“I will be focusing on my research process, which I hope the audience will find interesting in itself. I will show how a combination of personal and academic questions that led me to research my topic through a variety of methods, including interview, archival research, rhetorical analysis and participant observation.”

Belanger also plans on meeting with some of the Newman University athletes at a separate session to talk about Title IX as it relates to collegiate sports.