“Magic Happens: A Celebration of Harry Potter,” takes place April 12 and 13, with all Litfest events taking place in the Jabara Theatre, located in De Mattias Hall. Litfest will feature two keynote speakers — both experts on the Harry Potter universe — along with the debut of the 2018 “Coelacanth”, and much more.

One of the organizers for the event is Associate Professor of English Susan Crane-Laracuente, Ph.D.

“The tradition of the Literary Festival began 19 years ago,” said Crane-Laracuente. “Dr. (Bryan) Dietrich and fellow English faculty at the time founded it. Faculty selects a theme each year, but presentations are not strictly limited to that theme. This conference provides an opportunity and venue for students to build professional work and presentation skills outside the classroom and to ‘nerd out’ with fellow literature enthusiasts.” 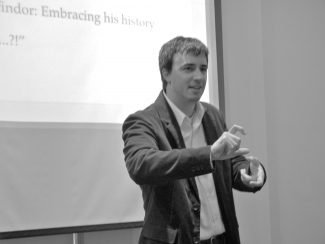 The festival will begin on Thursday night with speaker Travis Prinzi, who has been invited to present his keynote, “Saving Dumbledore: Moral Imagination and Forgiveness in Harry Potter’s Death.”

Prinzi is an author and speaker on the commonality of fantasy and politics, myth and culture in J.K. Rowling’s Harry Potter novels. John Granger, who has been called the dean of Harry Potter scholars by “Time,” said, “There is no more insightful commenter on the Harry Potter novels than Travis Prinzi.”

Friday night’s keynote, “Creative Design of the Wizarding World: Harry Potter and the Sorcerer’s Stone,” will be given by Newman University Assistant Professor of Graphic Design and Digital Art Laura Scholl.

Scholl worked directly on set for a Harry Potter movie — creating design elements for the film, “Harry Potter and the Sorcerer’s Stone.”

Other presenters include Newman University students whose poems and short stories were entered and published in the 2018 “Coelacanth.” Along with the journal’s annual debut, prose prize awards will be given out and free copies of the new journal will be available for all.

Professor of English Bryan Dietrich, Ph.D., will read from his new collection of poetry, “Single Bound.”

Crane-Laracuente commented, “He is […] a fantastic presenter. His voice lifts listeners into the worlds of his poems.”

Litfest is not only focused on literary works but visual media, such as film and theatrical performances, as well.

Two original Latin skits will be performed by students, as well as scenes from Harry Potter, featuring Newman theater students.

To close the festival, Sloppy Joe Improv will be performing its themed show, “Harry Joes and the Bucket of Sloppies,” at 8 p.m. Friday night.

Litfest is free and open to the public. Newman students, in particular, are urged to attend and are encouraged to think about proposing and presenting something of their own in future years.

Below is a complete schedule for this year’s Litfest event.