As the old saying goes, “The more you laugh, the longer you live.” Well, thanks to the Newman University Sloppy Joe Improv group, life can be extended by several years.

Based on the popular improv television show, “Whose Line is it Anyway?” the Sloppy Joes play improv games and act out short skits that make their audience members roar with laughter. 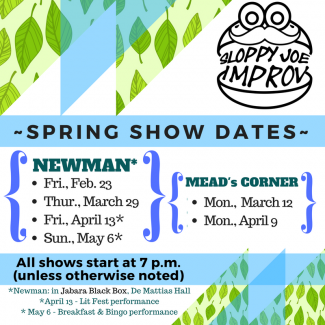 the last Friday of each month as well as an hour-long show every second Monday of the month at Mead’s Corner in downtown Wichita.

Sloppy Joe performer Amy Emerson said, “The staff (at Mead’s Corner) are generous to let us perform on a small stage toward the back, and it’s a nice excuse to invite Newman community members and beyond to come support a local coffee shop.”

The way the improv shows typically work is that they play games that require suggestions from the crowd.

“It is our job as improvisors to come up with characters, relationships, locations, problems, etc., that make up the scene — all on the spot,” Emerson explained. “We have lots of games we play — far too many to cram into one show. We tend to start our shows with some form of high energy openers, such as Rap Wars or Do Run. These two games involve a one-syllable name or word from the crowd, and each half of our team competes against the other to think of as many coherent sayings or sentences that rhyme with the suggested word.”

Other games throughout the show include guessing games such as Dating Game, Party Quirks or Secret Word.

“There are only two people in this one and it is very simple,” explained Schafer. “One has a script for a show and one improvises the entire time, trying to make sense of or justify what the person with the playbook reads, which can make for some very funny commentary.”

It takes practice to be a hilarious Sloppy Joe. To achieve such a status, members meet and practice twice each week for an hour and a half.

Emerson said, “This gives us the opportunity to explore character work, emotions, physicalities, long-form improv and introducing new games to the group. In addition, we have volunteered to dress up as characters at the Museum of World Treasures here in Wichita and have performed scenes for different theater club meetings and events on campus.”

The troupe is made up of 11 members: seniors Delaney Hiegert and Trevor Farney; juniors Taylore Rose, Claire Setter and Amy Emerson; sophomores Jack Schafer and Lucas Farney; and freshmen Hazel May, Rooslana Rusk and Marie O’Neal.

All students are welcome to try out for Sloppy Joe Improv. Auditions for the improv group happen at the beginning of each school year. For more information, follow the group on Facebook.