The Newman University campus now features two new pieces of art. Visitors may have already noticed the two large sculptures on the R.D. and Joan Dale Hubbard Patio on the south side of the De Mattias Fine Arts Center. The sculptures are on loan from Newton, Kan., artist Conrad Snider. 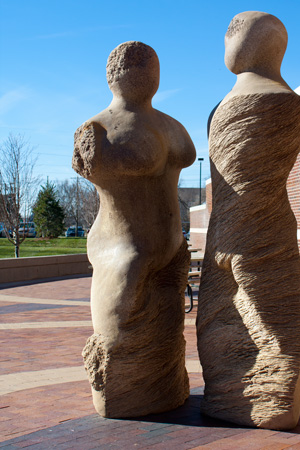 Snider specializes in large works, typically 4 to 12 feet tall, made from clay. The new pieces follow in that tradition.

“I like that they seem to be rising up out of the earth,” said Newman Director of Visual Arts Mary Werner, “that they are large and have a real presence about them.”

The title of the sculptures, “Figments,” is deliberately vague, according to the artist.

“I don’t want to be too specific,” said Snider. Instead, he said he wants people to, “spend some time with them, interact with them, bring their past and history to the experience of being around the pieces.”

Some in the Newman community may remember a large ceramic vase that sat inside the Gorges Atrium. The vase was also Snider’s creation, and is now on display at the Marriott Hotel in Wichita’s Old Town. Werner asked Snider for a piece to replace the vase when he moved it to the Marriott. When she received the new sculptures, she decided to display them somewhere other than the Atrium.

Each of the clay sculptures took about a year to make according to the artist. After three weeks of working with wet clay, Snider allows about six to eight months for the sculptures to dry. After that, the sculptures receive two firings (which can reach 2,300 degrees Fahrenheit), which take two weeks each.

Snider said he enjoys making art that viewers need to walk around and touch, rather than hold in their hand, to experience.

“I encourage people to touch the pieces while looking at them. One thing I really enjoy about the material is that tactile interaction,” Snider said.

The new sculptures arrived on Nov. 13 and will be on loan to the university for two years.