Newman University is among the top 15 percent of colleges, universities and trade schools doing the most to embrace America’s veterans as students, according to the G.I. Jobs 2011 list of Military Friendly Schools. The veteran-owned business, which annually rates schools and businesses nationwide on their support of the military and veterans, announced the 2011 list Aug. 16 on its website www.militaryfriendlyschools.com/list-2011.aspx. 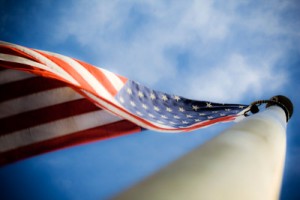 In an online profile of Newman, G.I. Jobs cited the university for its policy on the transfer of credits, its flexibility in class scheduling and accessibility, and its financial aid for veterans. Last spring Newman University officials re-entered their agreement with the U.S. Department of Veterans Affairs to participate in the VA’s Yellow Ribbon GI Education Enhancement Program for the award year Aug. 1, 2010 to July 31, 2011. The agreement marks the second year Newman has elected to participate in the Yellow Ribbon program.

“We are proud to be a part of the Yellow Ribbon program,” said Newman Dean of Admissions John Clayton, M.Ed., “and delighted to be designated a military-friendly school by G.I. Jobs. We believe Newman is a great fit for veterans, their spouses, and their children because of our values-based education, small class sizes, and supportive learning environment that fosters one-on-one interaction with Newman professors.”

The Yellow Ribbon GI Education Enhancement Program (Yellow Ribbon Program), part of the Post-9/11 Veterans Educational Assistance Act of 2008, honors the service of our armed forces, and helps those who wish to pursue a higher education. The Yellow Ribbon Program is designed for qualifying veterans, active duty personnel and their family members who wish to attend a degree-granting, private college or university. The VA matches dollar-for-dollar the contributions a participating institution makes toward tuition costs (tuition, mandatory fees, and in some cases other costs) which are above those of the most expensive public institution in Kansas. As a participant, Newman pledges to meet up to 50 percent of the difference between that subsidy and Newman’s costs. Therefore, qualified students can attend Newman for little to no out-of-pocket cost under the Yellow Ribbon Program.

Example of Yellow Ribbon Funding at Newman
The actual amount the VA and Newman contribute to an eligible individual varies based on the beneficiary’s enrollment status, length of service and other factors.

About the List
According to G.I. Jobs, schools on the list range from state universities and private colleges to community colleges and trade schools. The common bond is their shared priority of recruiting students with military experience. G.I. Jobs also reported that the tens of billions of dollars in tuition money now available with the passage of the Post-9/11 GI Bill last year has intensified an already strong desire by colleges to court veterans into their classrooms.

“This list is especially important now because the Post-9/11 GI Bill has given veterans virtually unlimited financial means to go to school,” said Rich McCormack, G.I. Jobs publisher. “Veterans can now enroll in any school, provided they’re academically qualified. So schools are clamoring for them like never before. Veterans need a trusted friend to help them decide where to get educated. The Military Friendly Schools list is that trusted friend.”

Derek Blumke, president of Student Veterans of America and a member of the list’s Academic Advisory Board, said in the announcement that “The Military Friendly Schools list is the gold standard in letting veterans know which schools will offer them the greatest opportunity, flexibility and overall experience. It’s especially important now with so many schools competing for military students.”

According to G.I. Jobs, their list was compiled through exhaustive research starting last April during which G.I. Jobs polled more than 7,000 schools nationwide. Methodology, criteria and weighting for the list were developed with the assistance of an Academic Advisory Board (AAB) consisting of educators from institutions of higher learning across the nation, as well as officials from the VA, the American Council on Education and other education and veteran groups. Criteria for making the Military Friendly Schools list also included efforts to recruit and retain military and veteran students, results in recruiting military and veteran students and academic accreditations.