The Newman wrestling team has had great success on the mat this season — but it’s not over yet. The team recently turned out four champions and two runner-ups at the 9th Annual Kansas Cup hosted at Newman University.

The team as a whole scored 153 points and all 10 wrestlers placed in the top five in their weight class. The four wrestlers claiming a championship title were Tyler Lawley (125 lb), Tyler Mies (157 lb), Noel Torres (184 lb) and Dalton Weidl (285 lb).

Coach Ryan Smith said, “It’s refreshing to see some of the fruits of our labor actually doing some big things.”

Smith is particularly proud to bring home the champion title at the Kansas Cup this year because he played a role in creating the tournament. Smith wrestled for Newman when the program first opened in 2004-05. He then became the assistant coach and eventually took over the program. He and his assistant, J.D. Johnson, came up with the idea for the Kansas Cup.

When the Kansas Cup started nine years ago there were only eight schools involved, now there are 17.

One of the most exciting matches of the day was early on. Lawley was up against a Fort Hays State University wrestler in the semifinals and beat him, which paved his way to the finals. There he secured his champion title.

Smith felt that the team was capable of taking the No. 1 or 2 spot at the tournament but was thrilled with Weidl’s final match that put them over the top and into the No. 1 spot. 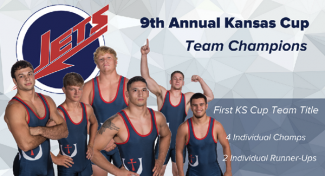 Smith said, “We’ve gotten second the last two years, so it’s about time we finally won our own tournament.”

The starting lineup is a fairly even mix of seniors and freshmen this season. However, the team will lose three of their starting seniors next season. Smith has already signed three freshmen that he hopes will make a big impact on the team.

Though wrestling tends to be a more individual sport, there seems to be an important team dynamic to it as well. Sophomore Thor Balavage looks forward to cheering on his teammates during their matches and knows they’ll be doing the same for him when he’s on the mat. “Teammates push you to do your best, hold you accountable and remind you to constantly push towards your goals. My goal every day is to make someone else better and to be the loudest person in our guy’s corner.”

Balavage said he has grown exponentially as a wrestler this year thanks to his teammates pushing him to do so.

Senior Noel Torres has had a successful final season at Newman with an overall record of 28-2. He is passionate about wrestling and thinks of it as more of a lifestyle rather than a sport or hobby.

He said, “My main goal at the end of my career is it to say I gave it my all and there was nothing else I could have done to change the outcome.” Torres trains hard and makes sure to never overlook an opponent when it comes to a match.

The Newman wrestling program has been striving to be one of the most talked about programs in the state of Kansas for some time. Teams in the past may have been just as skilled but the individuals on the team this season have put Newman on the map in the wrestling world.

Torres said, “Watching this program build up and see where it can go is pretty cool, and being able to say you were a part of that process is even better. Newman is a great school to be a part of and we are blessed to be able to step out on the mat and represent our school.”

The team has three duels left this season before they host the MIAA tournament Feb. 11. Smith plans to be fairly conservative with the lineup for this tournament because his sights are set on the Feb. 23-24 NCAA super regional tournament — the tournament that qualifies wrestlers for the NCAA national championships.

Torres looks forward to the rest of the season and said, “Its a fun time of year so we are excited to see where we end up in March.” He urges fans to “stay tuned.”

“The end goal is to become a national championship team. That’s the ultimate goal,” said Smith.

As for next season, Smith said they’ve got a lot of work to do. Six freshmen were signed last year so this year’s goal is seven or eight with hopes they’ll continue building on the success the team has achieved this season.

Smith concluded, “We have a system in place where we feel we will continue to climb each year. Dustin Reed was an All-American for us and hopefully, we’ll have a few more for us this year.”