Newman University alumna Janet Eaton was chosen as the new superintendent of Catholic schools in the Diocese of Wichita.

Eaton comes to the diocese with more than 30 years of experience in Catholic education and said she looks forward to working collaboratively with the pastors, principals and all others in the Diocese of Wichita.

Eaton succeeds Bob Voboril, who held the superintendent position for 25 years. Voboril was highly successful in his role and received many awards, one of which was an honorary degree from Newman University during the 2018 commencement ceremony. Eaton has admired Voboril for many years and said, “It will be my humble honor to follow in his footsteps.”

Eaton said she looks to contributing to, as well as learning from,  such a wonderful diocese.

The entirety of Eaton’s professional life has been in Catholic education, and she has led a very successful career. She holds her faith in high regard and trusts God that this new position is the role she is meant to have.

“The path that I have taken throughout my professional life is one by which I have always relied on the guidance of the Holy Spirit. The position of superintendent of Catholic schools for the Wichita Diocese is a position that I feel I am being called to assume. Returning to the diocese where I began my career is a wonderful honor,” she said.

Eaton began her journey toward an educational career at Newman University. She studied elementary education at Newman from 1982 to 1986. She received a middle school endorsement for math along with her degree. 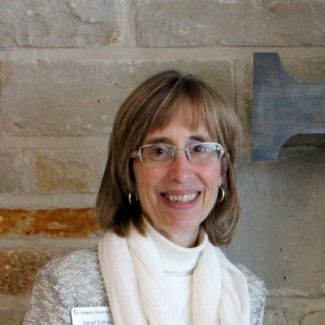 A job change for her husband in 1999 landed her in St. Louis where she was hired as the principal at Immaculate Conception Parish School. When she arrived, the school was home to 250 students and located in an area booming with growth. Eaton saw the school undergo major changes through the next 12 years, tripling enrollment to 810 students. The tremendous growth resulted in the construction of a new school building.

Most recently, Eaton was principal at St. Dominic High School in O’Fallon, Missouri. During her seven years at the school, she finished her education specialist degree with an emphasis on superintendency leadership at the University of Missouri-Kansas City.

The move to Wichita for Eaton, her husband, Kevin, and their son Cooper is one that the family looks forward to.  Eaton and her husband have three children. Her oldest son, a 25-year-old paramedic, will remain in St. Louis and her daughter is a senior at Missouri State University.  Both sides of their families reside in the greater Wichita community and so, according to Eaton, after 19 years of being gone, coming home is a gift.

As for her newest position in Wichita, Eaton felt called by God. Eaton said her faith is the most important part of who she is and she can’t imagine a life any different.

She said, “Being able to serve our church in a diocese that is so very well respected for stewardship is a blessing.

“I have every intent to assist with the plans that have been put in place for the coming school year,” said Eaton, “and to work collaboratively with all to continue providing a strong and exemplary faith-based Catholic education for the youth of the Diocese of Wichita.”